I was lucky enough to be born in the most (in my opinion) beautiful city in Britain. Bath is a city with a divine ambience, superb elegance and a fascinating past. The city is famous for its grand Georgian terraces, beautiful Abbey and the Roman baths. To me, Bath is somewhere I will always hold close to my heart because of the friends I have made there, the special times I have spent with my mother and the ways its history has intrigued me. This week I found myself saying goodbye to Bath before I move to India, as I slowly walked around the places that hold the fondest memories. 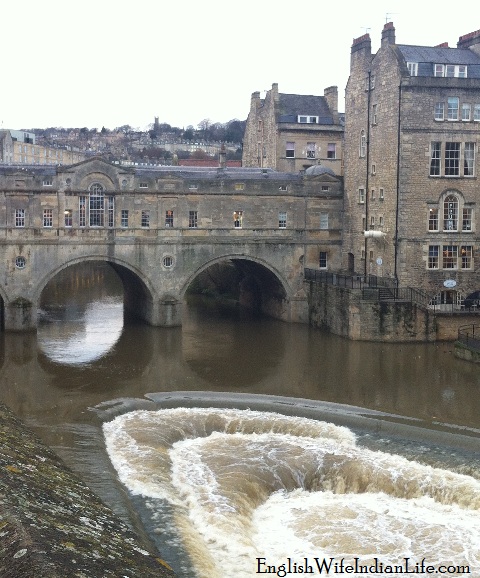 Recently there was an article about Bath in a Marathi newspaper that my husband’s grandmother reads; this article was about the healing waters of Bath. This made me smile so much, what were the chances? The only hot spring in Britain, the waters of Bath are something I have always been fascinated with; the mystery, mythology and miracles.

Bath was originally named Aquae Sullis (waters of Sulis) by the Celts because of the sacred hot spring found in, what is now, the heart of the city. Sulis, the British goddess of wisdom and healing, was worshipped at this hot spring thousands of years ago. When the Romans came to Britain they found the Celts worshiping Sulis at this sacred spring. The Romans soon realised that the goddess Sulis had similar powers to the Roman goddess Minerva (goddess of wisdom, medicine and magic). These two Goddesses were then combined to become ‘Sulis Minerva’ and both Celts and Romans, side-by-side, worshipped her at the spring. Around this sacred spring a grand temple and complex of baths were constructed during approximately 54 AD, most of which still stands today.

People from around Britain and the entire Roman Empire came to bathe in the sacred waters to benefit from their healing powers and to worship Sulis Minerva. Over the centuries the Saxons and Georgians too recognised the powers of the waters. This sacred spring still flows with the same naturally hot water, just as it has done for thousands of years. I have been lucky enough to bathe in the magical water myself and to see the remains of the Sulis Minerva temple. The modern spa uses the same naturally hot, mineral rich waters bathed in by the Celts and Romans thousands of years ago. Bath is a magical city, you can still feel presence and see the evidence of its history around every corner.

One of my earliest memories is running around the Beazer garden maze. It is small maze next to the river, a place I would love to to go with my mum. Sadly, it is looking a little worse for wear these days but it still has the power to bring back feelings from my childhood and you can still see small children racing around. I can remember the excitement of reaching the Roman style mosaic (sometimes with a little bit of cheating) in the middle of this stone paved labyrinth.

The mosaic features the head of the Gorgon at its centre, the Gorgon with snakes flowing out of his mane of hair and entwined together in his beard. The Gorgon is a mythical creature killed by the Greek hero Perseus with the assistance of the Goddess Athena. The Greek Goddess is considered to be same deity as the Roman Minerva, both having the same attributes. After killing the Gorgon, Perseus then gave its head to the goddess Athena and was then regarded as a symbol of protection from evil. The image of head of this Gorgon is seen directly above the entrance of the Sulis Minerva temple to protect worshipers.

Around the head of the Gorgon on this beautiful mosaic, which sparkles with small gold tiles, are six apses depicting various aspects of Baths British Celtic Roman heritage. These aspects include Goddess Sulis Minerva scattering flowers, dolphins, Orpheus, Pegasus (the winged horse), the Minotaur and Blaudin (the legendary founder of Bath 10,000 years ago who is said to have been cured from leprosy by the waters of Sulis). As I child I would pretend to be Sulis Minerva flying around the maze on the back Pegasus, trying to slay the Minotaur. I really love this place and I cannot wait to take my own children here to have their own adventures on this small patch of grass, next to the river in the centre of Bath.

Before I left Bath, for the last time before I go to live in India I made sure stopped by the gift shop. I bought a small glass bottle containing some of the sacred waters of Bath to take to India with me so I will always have a some of the water with me. I also bought a Christmas decoration for my new home, the first of many I hope to hang on my Christmas tree in India next Christmas. A beautiful decoration of the head of the Gorgon, the same Gorgon which protected the temple of Sulis Minerva and also found in the center of my childhood memories.

The Celts and Romans saw the similarities in their goddesses and worshiped them together in harmony. The two different cultures of my husband and I have also combined. I can even see the similarities between Sulis Minerva and the Hindu goddess of wisdom, Saraswati, who is associated with flowing water.

What do you think? Cancel reply