We are so lucky to visit England during Easter. Adorable lambs, happy daffodils, pale yellow primroses and the weather isn’t unbearably cold. Easter celebrates the resurrection of Jesus Christ after his persecution and crucifixion. This spring festival is celebrated on the Sunday after the first full moon after the northern spring equinox. It’s mostly likely that the name Easter derived from Eostre, a fertility Goddess, her symbol a rabbit. Early Christians accepted some of the Pagan traditions celebrated during Easter (exchanging eggs for example). Christian or Pagan, the sentiment is the same, Easter is a festival which celebrates new life and hope. 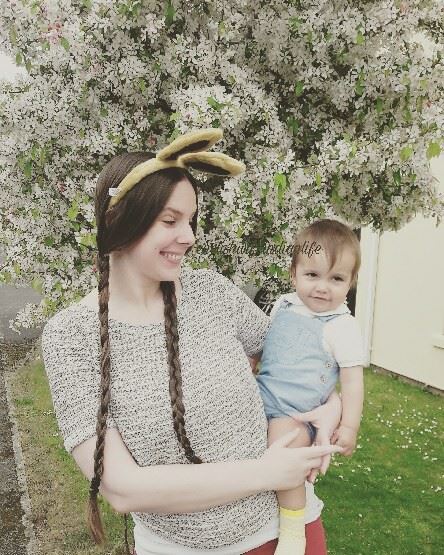 Good Friday, the Friday before Easter commemorates the crucifixion of Jesus Christ. The Romans regarded Jesus as a “political radical” after performing many miracles and gathering a large following, so they wanted him dead. It is believed that Jesus’ suffering and death was an atonement for the sins of humanity.

It’s traditional in England to eat toasted hot cross buns today, a tasty spiced sweet bun marked with a cross. The cross representing the crucifixion and the spices symbolising the spices used for Jesus’ embalmment after he died. My Sonshine tried his first hot cross bun and loved it!

We spent the day at a petting farm, with two of my sisters. Sonshine got to see goats, sheep, owls, llamas, ponies, geese, pigs…even an Easter rabbit!

“There’s an old saying: You can’t have Easter without Good Friday. Many people express the desire to have an open heart, a loving heart, a compassionate heart. Well, how do you open your heart? Usually, it’s broken open. Jesus on the cross breaks your heart. He breaks it open. You can’t look at the crucifixion without having an experience of compassion. Only a heart broken open — one that can have compassion for those who suffer — can truly appreciate the new life represented by Easter”

On Saturday we had great day visiting family on the south coast. I was so excited for my Sonshine to see the sea for the first time in his life (especially as we live in the geographical centre of India, we don’t get many opportunities). After a long day of crawling around a new house, seeing family he hadn’t seen since he was two months old and happily pushing the keys of his great-grandfather’s digital church organ, he was completely exhausted. He was so tired that by the time we made it to the beach, he waved goodbye to the waves, with a bewildered frown. I think he wanted to go back to the car to have a nice nap. So we left, and he did.

On Easter Sunday, I began the day feeling “home sick”, even though I still feel at home in England and I am enjoying these precious days with my family. I don’t think home sickness is the correct label for the feeling. Living between two countries is really hard, but you just have to make the most of every moment with the people you love, wherever you are!

The feeling was soon swept under a carpet of chocolate, until I just felt nauseous. Easter Sunday is a day to feel joy as it’s the day Jesus came back to life and spread love, hope and healing.

In the afternoon we went to the village to roll painted boiled eggs down a hill, an Easter tradition. Eggs are a symbol of new life, cracked eggs could represent the open tomb. We couldn’t find a very good hill for rolling, so it ended up being more of an egg lobbing. The eggs were all battered after a couple of rounds of egg lobbing, except for my nanny’s, she wanted to take it home and make an egg and cress sandwich.

We then visited the village church, and it was beautiful to see my Sonshine’s eyes light up when he saw the stained glass window. He was completely fascinated by the colours and the way the light shone through it.

I find it interesting that Pagan and Christian symbology intertwine to become the festival we celebrate today, embracing spring, new life and rebirth. It’s something I find so life-affirming, recognising the similarities between cultures, spotting the collective consciousness at work, seeing a sparkle of something that unites us all. It definitely helps me stay enthusiastic about discovering and understanding the causes and history of the unique differences between the two cultures we live in. However different two cultures can seem, there is this unifying force that connects us all.

What do you think? Cancel reply